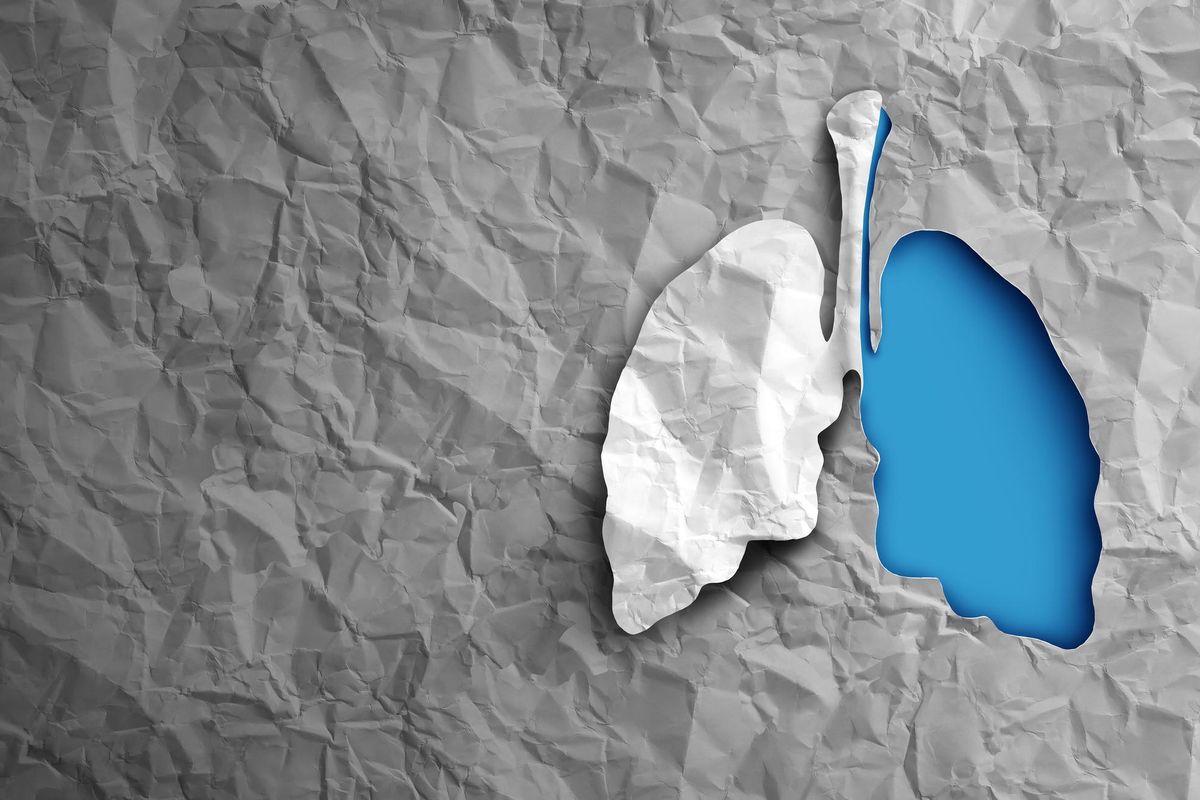 In 2013, Ivy Elkins started feeling a worsening pain in her neck and an odd pain in her elbow. Eventually, she was unable to even straighten her arm. Her primary care doctor thought it was an overuse injury. X-rays showed nothing unusual, and physical therapy provided no improvement.

The then-47-year-old mom of two went to an orthopedist who did an MRI and found that a mass had eaten away her bone. The doctor ordered a biopsy, and Elkins learned she had adenocarcinoma, a type of non-small cell lung cancer.

Elkins had a 3-centimeter mass in the right lobe of her lung, and cancer had spread throughout her body to bones in her neck, elbow, ribs and pelvis, and to her brain.

“I was devastated because it felt like it came from nowhere,” Elkins said. “I went in for pain in my elbow and my neck, and now I have stage 4 lung cancer. I never imagined I’d be susceptible to lung cancer; I didn’t know then what I know now.”

“If you have lungs, you can get lung cancer”

On average, lung cancer kills 171 American women each day — more than any other cancer — and 130,000 people a year in the United States. Despite this fact, lung cancer in women is hidden in some ways. It isn’t discussed the way breast cancer or ovarian cancer is, there’s little funding for research, and it can carry significant stigma because of the misconception that smoking is the only cause.

“The most common misconception about lung cancer, actually in both women and men, is that you need to have smoked tobacco to get lung cancer,” said Dr. Sukhmani Padda, director of thoracic medical oncology at Cedars-Sinai Cancer Center in Los Angeles, California. “And the reality is that if you have lungs, you can get lung cancer.”

The Centers for Disease Control and Prevention (CDC) estimates that 10% to 20% of people diagnosed with lung cancer in the United States are nonsmokers or people who have smoked fewer than 100 cigarettes over their lifetime; that amounts to 20,000 to 40,000 people per year. At least one study suggests that lung cancer diagnoses among nonsmokers is increasing, from 8% in 1990 and 1995 to nearly 15% in 2011 and 2013.

And women are at higher risk, according to a research study published in The Journal of the American Medical Association in 2020. The study looked at 129,000 lung cancer cases and found that the proportion of never-smoking cases was higher in women, at 16%, than in men, at 10%, across all ages and ethnicities. The study also found that people with adenocarcinoma, like Elkins, were more likely to be never-smokers compared with other types of lung cancer.

It’s unclear why nonsmoking women are disproportionately affected or why rates of nonsmoking lung cancer are increasing. “There are some theories about genetics or hormones, but there's nothing definitive there,” said Padda, who added that family history and environmental factors like air pollution and radon exposure also increase risk.

Now as a lung cancer survivor and advocate, Elkins is wary of separating people into categories of “smoker” and “nonsmoker” to avoid making stigma worse. But the instances of nonsmokers getting lung cancer are important to recognize, particularly because the screening processes haven’t really caught up with these increasing rates. Even though technology exists for early detection, nonsmokers are generally not screened for lung cancer the way smokers are, Padda said, so they are often diagnosed at a later stage.

“Right now, we have imaging based lung cancer screening with low dose CT, which does reduce lung cancer mortality by 20%,” Padda said. “But the criteria [are] primarily for people who have had some smoking exposure. And even though we have this option for early diagnosis, the uptake on average within the United States has been relatively low.”

Instead, like Elkins, patients must be aware of the symptoms and may have to see a variety of doctors, and if possible specialists, to determine whether lung cancer is the cause. But it’s complicated; symptoms may present differently based on whether the cancer has metastasized (spread) and where it’s metastasized, as in the case of Elkins and her elbow.

“I've seen one end of the spectrum where a patient presents with lung cancer and they have no symptoms, to symptoms related to tumors in the lungs such as cough, chest wall pain, shortness of breath, or even coughing up blood,” Padda explained.

Symptoms can also include fatigue, lack of appetite and unexplained weight loss. When someone has lung cancer, tumors can often spread to the bones, liver and brain, and if this occurs, patients may have additional symptoms like bone pain, abdominal pain, headaches and brain fog.

There’s no way to completely prevent lung cancer; however, according to the Mayo Clinic, people can reduce risk by avoiding tobacco; getting their homes tested for radon and fixing any problems; avoiding carcinogens, which are things that can cause cancer; exercising; and eating plenty of fruits and vegetables.

For people who are diagnosed, the good news is that treatment for lung cancer is increasingly precise. Surgeons may be able to remove the tumors, and if surgery isn’t an option, Padda said, the patient will be evaluated for treatment combining chemotherapy, radiation therapy and immunotherapy. Doctors can also conduct biomarker testing, which involves taking a biopsy of the tumor and looking for mutations (changes) that can be targeted and destroyed by specific medicines.

This was the case for Elkins, who had biomarker testing that found a mutation.

Elkins tried a targeted medication that had been recently approved by the FDA, and she responded to it. “The brain metastasis disappeared, bone grew back in areas of metastasis, and my lung tumor shrunk. Within a few short weeks of starting my treatment, I could already feel things improving,” she said.

Elkins felt good about her treatment. “I lead a very active, normal life. There's a lot of hope for people with lung cancer, and a lot of treatments. Anybody who is diagnosed with lung cancer shouldn't be told to go home and settle up their affairs; what they should be told is to get biomarker testing and find out what specific type of lung cancer they have, because all lung cancer isn't treated the same anymore.”

This resource has been created with support from Pfizer Inc.