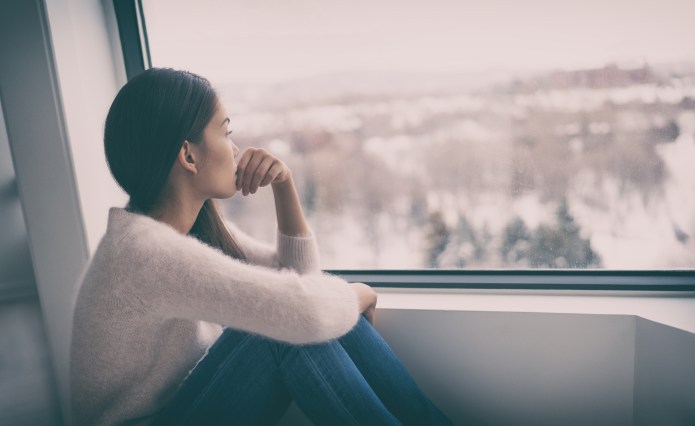 As we enter the colder months, with the days getting shorter and nights coming quicker, some of us find that we’re more tired than usual, are generally grumpy and feel out of it and spacey. Maybe you’re feeling less excited about or interested in things that you normally love. We often chalk it up to that melancholy of another summer ending and another year coming to a close, but it’s a little more complicated than that.

While the pandemic and its toll on our collective and individual mental health is a part of the equation in 2020, these feelings are also potentially mixing with the other extremely common fall and winter mental health condition: Seasonal Affective Disorder (SAD).

Seasonal affective disorder (SAD) is a type of depression that is four times more likely to strike women than men, according to a study in the American Journal of Psychiatry . A whopping four to six percent of the U.S. population suffers from SAD, while up to 20 percent more may suffer from a milder form of the winter blues. And if you live in the northern latitudes, you are eight times more likely to be affected by SAD than if you live in sunnier regions.

What are the symptoms of Seasonal Affective Disorder (SAD)?

During these bouts with depression in the winter, people dealing with it tend to eat more and exercise less. They often have symptoms such as extreme fatigue and trouble falling asleep, or sleeping more often.

SAD is caused by the brain not receiving enough daylight which is needed to trigger serotonin, a hormone that regulates mood.

“Often the symptoms are severe enough to interfere with a person’s ability to function effectively at home or work, not just make them uncomfortable,” says says Cort Christie of Alaska Northern Lights.

In his book, Winter Blues: Everything You Need to Know to Beat Seasonal Affective Disorder , author Norman E. Rosenthal outlines the signs to look for if you need to seek medical help:

How to cope with your SAD

Seasonal Affective Disorder doesn’t just plague adults during the darker months — children can also become affected by this form of seasonal depression. Make sure you know these signs of SAD and how to prevent it in your kids.

Approximately 85 percent of SAD cases benefit from exposure to bright light therapy, according to the American Psychiatric Association.

Patients are advised to sit near full-spectrum light boxes, which can simulate sunshine. This treatment seems to work especially well if done for 30 minutes at a time, preferably in the early morning, according to author and SAD specialist Dr. Norman Rosenthal. Daily exposure to light boxes that provide 2,500 to 10,000 lux (a measure of light intensity) is recommended. Researchers at Harvard reported that remission from SAD is twice as likely if this light therapy is also adjusted to your own melatonin rhythms.

Studies have also found that cells in the retina are particularly sensitive to blue light, suggesting that this wavelength may powerfully affect circadian rhythms. Researchers are investigating whether blue light might provide the same benefit as white light but with less exposure time.

General medications used to treat moderate depression are sometimes indicated, as are doses of melatonin — but make sure you talk with your doctor about what is the right treatment combo for you.

What are some other ways to prepare for SAD?

Our mission at SheKnows is to empower and inspire women, and we only feature products we think you’ll love as much as we do. Please note that if you purchase something by clicking on a link within this story, we may receive a small commission of the sale.

A version of this story was published November 2013.

Before you go, check out our favorite (affordable) mental health apps: