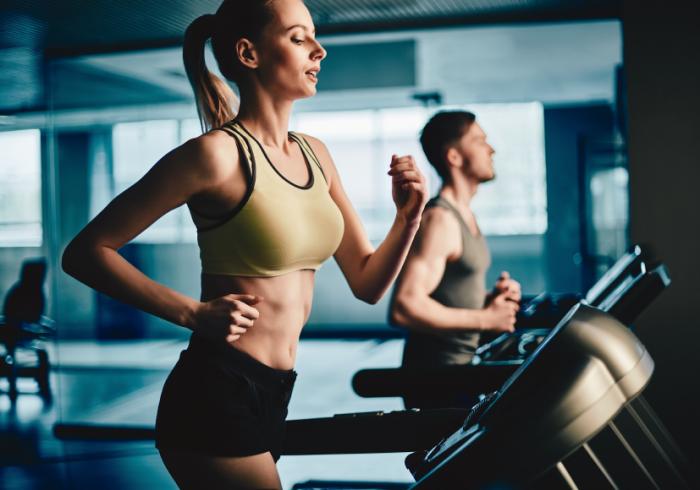 Get a Firm and Toned Chest

Many exercise programs for women revolve around using fixed machines to shape a particular muscle group and they shy away from using free weights (i.e., barbells and dumbbells). This means that multiple exercises are often needed to activate large muscle groups like the chest. In contrast, free-weight exercises tend to be more general and activate several regions of the chest within a single lift. For example, the barbell bench press will strongly activate the lower, outer and middle parts of the chest. It’s really an all-around excellent exercise for improving the quality and fullness of your entire chest, but it will also firm your shoulders, muscles of the rib cage, some upper back muscles and arm extensor muscles.

You may be thinking that the bench press is a testosterone-saturated exercise reserved for hardcore male lifters and football players. What you might not appreciate is that plenty of female athletes have successfully used bench presses to improve their upper body strength in sports as diverse as swimming, volleyball and tennis, to name a few. While a champion women’s bench presser in the 105-pound weight class might lift 220 pounds, which is pretty good by any standards and more weight than some guys can handle, this doesn’t mean that every woman should bench twice her bodyweight to achieve the most from this exercise. A strict lifting form with adequate resistance doesn’t have to approach world record status to improve a woman’s upper body and particularly, chest shape and tone.

Bench presses have a wide-reaching impact on many torso muscles and as a result, they’ve been used as a successful therapeutic tool. A study by Ohira and colleagues found bench presses have been shown to improve breast cancer survivors’ outlook on life. In this study, about 80 percent of women who used bench press resistance training twice a week had improved quality-of-life survey scores. This compared to only 51 percent of participants in a control group. This study is the first to examine how weight training and specifically, the bench press, helps women who’ve had breast cancer.

Anyone can benefit by adding bench presses to their training program. In addition to its superior activation of the pectoralis muscles of the chest, it will result in outstanding improvement in muscle shape and firmness of your deltoids (shoulders), triceps (arm extensors), latissimus, intercostal (muscles of the rib cage) and serratus anterior (scapula muscles). Thus, the barbell bench press qualifies for a superior all-around upper body exercise and is a great tool, especially if you have limited time for training.

1. Place a barbell on the weight stand of a flat bench. Load the barbell so that you can get 15 to 20 repetitions. With this light weight, you’ll be able to warm up your shoulders and chest before getting to the heavier next set. On sets two and three your shoulders will be warmed-up enough so that you can load the barbell with a little more weight, ideally an amount where you’re only able to lift the bar 10 to 15 times.

2. Lie supine on the bench. Place your hands on the bar with a pronated grip (palms facing your feet) and grab the barbell with a shoulder-width grip.

3. Lift the weight from off the weight stands by extending (straightening) the elbows. A training partner or trainer could also be used to lift the bar for you so it’s over your shoulders. Make sure you’re in control of the weight in this position before going to the next step.

4. Slowly lower the bar so that it moves in a slight arch from closer to your feet at the bottom (with the bar close to your chest), to closer (slightly) to your chin at the top of the lift. The weight should move from over the shoulders to a position where it almost makes contact with the lower part of your chest at about the fifth rib. You should inhale as the weight is lowered to the chest in a slow and controlled fashion.

5. Without making contact with your rib cage or breasts, immediately push the bar upward. Move it in a slight arch toward your head so the weight is returned to a position immediately under the shoulder joint. Exhale during the ascent of the barbell. 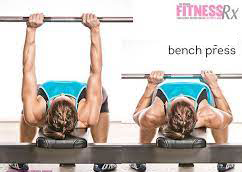 The sternocostal head of the pectoralis strongly contracts when the humerus is in an extended position during the lower and middle part of the lift. The clavicular head of the pectoralis is more powerfully activated during the final part of the lift as the arms are extending. If you use a grip that’s wider than your shoulders, this will decrease the range of motion, but this shoulder angle is more favorable for emphasizing the outer portion of the pectoralis major. Thus, if you need more pectoralis depth along the lateral borders of the chest, you might want to use a wider grip. Conversely, a narrower grip will contract the sternocostal head of the pectoralis major more strongly. However, the problem with a narrow grip is that the triceps muscles usually fatigue before the chest, so a narrow grip won’t challenge your chest musculature adequately.

Aside from the safety problems common to all free-weight exercises, the flat bench press could aggravate or induce rotator cuff irritation in your shoulder. That’s because these muscles limit movement of the glenohumeral joint posteriorly (and the rotator cuff muscles prevent this posterior location) as the bar is being lowered. Normally only heavy weights performed multiple times for many years will increase the potential irritation to the rotator cuff muscles (such as trying to make a record lift). On the other hand, moderate weights (e.g., lifts from 10 to 12) will normally induce no rotator cuff irritation (unless you already have a shoulder problem). Thus, your exercise form should be excellent and your choice of resistance should be appropriate as this will help to strengthen your pectoralis without harming the rotator cuff. With this approach you should be able to benefit from the advantages and minimize any potential downsides of the bench press.

The bench press won’t work miracles, but it will come pretty close. It will activate a host of upper body muscles resulting in a new, firmer and shapelier chest and upper body. You don’t have to be a world-class powerlifter to appreciate the transformations that are possible by this very basic and simple (but not easy) exercise, but you do have to acquire the resolve to do it regularly and with some effort.

1. Baker DG and Newton RU. An analysis of the ratio and relationship between upper body pressing and pulling strength. J Strength Cond Res, 18: 594-598, 2004.